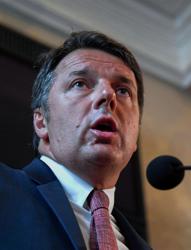 ROME (Reuters) - Italian Prime Minister Giuseppe Conte won a crucial confidence vote in the Chamber of Deputies on Monday, hanging on to power after a junior partner quit his coalition last week and opened a political crisis amid the raging COVID-19 pandemic.

Had he lost the vote, Conte would have been forced to resign.

After his appeal to opposition and non-aligned parliamentarians to back him following the walk-out by former premier Matteo Renzi's Italia Viva party, Conte's government won the lower-house vote by 321 to 259.

The margin was wider than expected and secured Conte an absolute majority in the 629-seat chamber.

Conte will face a tougher test on Tuesday in the upper house Senate, where the government had only a slim majority even when Renzi's lawmakers were still part of the coalition. Republican donations surge despite corporate boycott after Capitol riots
Working iPhone 11 returned to owner nearly six months after it fell in a lake
Academic held in Iran for two years says imprisonment pushed her to brink of suicide
Smartphones and pacemakers: The risks you need to know about
Apple faces French complaint over iPhone advertising tool
ITV has spoken to Piers Morgan over Meghan coverage, CEO says
Michelle Obama to be inducted into U.S. National Women's Hall of Fame
Nun kneels in front of police to stop Myanmar violence
Meghan's father says the British royals are not racist
British royals silent amid crisis over Meghan's claim of racist remark