Russian opposition leader Alexei Navalny is seen on board a plane before the departure for the Russian capital Moscow at an airport in Berlin, Germany January 17, 2021. REUTERS/Polina Ivanova

MOSCOW (Reuters) - Reuters staff saw a plane carrying Kremlin critic Alexei Navalny land at Moscow's Sheremetyevo airport late on Sunday after being diverted from Vnukovo airport, where hundreds of his supporters had come to meet him.

Police detained several people at Vnukovo airport and cleared a crowd out of the terminal. Supporters chanted "Russia will be free!" and "Navalny! Navalny!". 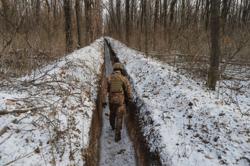