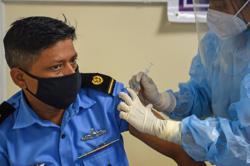 OTTAWA, Jan. 15 (Xinhua) -- Home sales in Canada jumped 7.2 percent in November and December of 2020, setting a new all-time record, according to the Canadian Real Estate Association (CREA) on Friday.

The month-over-month increase in national sales activity from November to December was driven by gains of more than 20 percent in the Greater Toronto Area and the Greater Vancouver Area.

It was a new record for the month of December by a margin of more than 12,000 transactions. For the sixth straight month, sales activity was up in almost all Canadian housing markets compared to the same month in 2019.

The actual national average home price in the country was a record 607,280 Canadian dollars in December 2020, up 17.1 percent from the same month last year.

The national average price is heavily influenced by sales in Greater Vancouver Area and the Greater Toronto Area, two of Canada's most active and expensive housing markets.