Seven of the 11 primary S&P 500 sectors ended in green, with utilities and real estate up 1.94 percent and 1.39 percent, respectively, leading the gainers. Materials slipped 1.06 percent, the worst-performing group.

U.S.-listed Chinese companies traded mostly higher with seven of the top 10 stocks by weight in the S&P U.S. Listed China 50 index ending the day on an upbeat note.

The U.S. House on Wednesday started voting on the single article of impeachment against President Donald Trump, charging him with "incitement of insurrection," after his supporters stormed the Capitol last week.

On the data front, U.S. consumer price index increased 0.4 percent in December, after rising 0.2 percent in November, the U.S. Bureau of Labor Statistics reported Wednesday. The reading was roughly in line with a Dow Jones estimate.

On Tuesday, Wall Street's major averages eked out modest gains after choppy trading, as politics loomed over the markets. 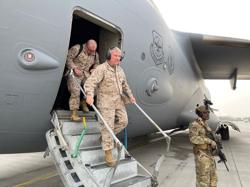