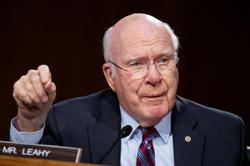 Jami Raskin (D-MD) walks through the U.S. Capitol before the signature of the article of impeachment against U.S. President Donald Trump, in Washington, U.S. January 13, 2021. REUTERS/Joshua Roberts

WASHINGTON (Reuters) - Nine members of the U.S. House of Representatives named by Speaker Nancy Pelosi will prosecute the House's impeachment case against President Donald Trump when it goes to trial in the Senate.

The group known as impeachment managers, named by Pelosi on Tuesday, are lawyers with backgrounds in law enforcement, civil rights and constitutional law. They are just beginning to organize their work. Several of them told reporters Wednesday they did not know about the timing of the trial and were still discussing other elements such as witnesses.

Here are some facts about the impeachment managers:

Raskin, 58, will lead the prosecution. He is a former professor of constitutional law at Washington's American University. A member of the Judiciary Committee, he worked on the House's first impeachment of Trump in December 2019 and helped draft the impeachment article the House passed against the president this week. Raskin has represented a district of Maryland in Congress since 2017. He lost his 25-year-old son to suicide two weeks ago.

In her 13th term in office, DeGette, 63, was first elected in 1996. A former chief deputy whip, she presided over the House debate on impeachment in December 2019. Before she was elected to Congress, DeGette was an attorney focusing on civil rights and was assistant minority leader in the Colorado state legislature.

Cicilline worked on Trump's first impeachment and was involved in drafting the article of impeachment this week. He chairs a Judiciary subcommittee that has probed abuse of market power by large tech companies. Cicilline, 59, serving his sixth term in Congress, is a former public defender for the District of Columbia, a former mayor of Providence, Rhode Island and a former lawmaker in that state.

Castro, 46, is a member of the House Intelligence Committee, which held many of the hearings behind closed doors investigating Trump's first impeachment in 2019. He is a former leader of the Hispanic caucus and a critic of Trump's immigration polices. A Texas-born Mexican-American, he is serving his fifth term in Congress. His twin brother Julio ran for the Democratic nomination for president in 2020.

Swalwell is on the House Intelligence and Judiciary committees and was involved in investigating Trump's first impeachment. He is a former prosecutor who in 2019 briefly sought the Democratic nomination for president. The 40-year-old is serving his fifth term in Congress.

Lieu, 51, is a former Air Force officer who was a prosecutor in the force's legal arm, the Judge Advocate General's Corps, and is now a colonel in the Air Force Reserve. He is a co-sponsor of the article of impeachment that the House approved Wednesday, along with Raskin and Cicilline.

Stacey Plaskett, a 54-year-old Black former prosecutor, represents a U.S. territory, the Virgin Islands, in Congress. Before being elected to Congress in 2014, she was an assistant district attorney in the Bronx borough of New York City, and a senior counsel at the Department of Justice.

Neguse, 36, is starting his second term in Congress. The son of refugees from Africa, he is Colorado's first African-American congressman. He is a member of the Judiciary Committee and earlier in his career was a litigator in private practice.

Dean, 61, is a former member of the Pennsylvania state legislature, where she served four terms before being elected to Congress in 2018. Earlier she worked as a lawyer in private practice and taught writing and ethics at LaSalle University. She is a member of the Judiciary Committee. 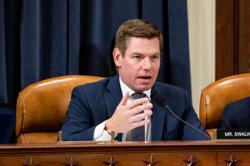