RIO DE JANEIRO, Jan. 12 (Xinhua) -- Brazil's inflation rate in 2020 climbed to 4.52 percent, above the government's target of 4 percent and the highest since 2016, the Brazilian Institute of Geography and Statistics (IBGE) reported Tuesday.

Despite exceeding the 4 percent target, the rate was within the 1.5 percent margin of tolerance set between 2.5 percent and 5.5 percent, according to the IBGE report.

Food saw the biggest price hikes last year, along with beverages, rising by 14.09 percent, the largest increase since 2002, IBGE revealed.

"There was a global increase in food prices in 2020 amid the pandemic," IBGE noted.

The products that marked the biggest price increases were soybean oil by 103.79 percent and rice by 76.01 percent.

Other goods and services that contributed to inflation were housing with 5.25 percent increase, electricity with 9.14 percent and household goods with 6 percent. The only item to see a price drop was clothing, falling by 1.13 percent.

The Brazilian government has set an inflation target in 2021 of 3.75 percent, with a 1.5 percent margin of tolerance. 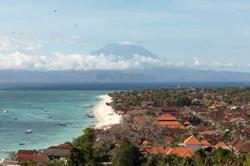