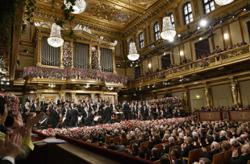 VIENNA, Jan. 1 (Xinhua) -- Without any live audience in the "Golden Hall" of the Musikverein in Vienna, the 2021 Vienna Philharmonic New Year's Concert took place on Friday, under the baton of Italian conductor Riccardo Muti.

"As an ambassador of music and together with maestro Muti we would like to send a message of hope and optimism through our concert," said Daniel Froschauer at the concert. He is both the Vienna Philharmonic's chairman of the board as well as the first violinist.

The New Year's Concert by Vienna Philharmonic took place in front of empty ranks in the "Golden Hall" of the Musikverein in Vienna, the first time in its 81-year history since the event started in 1939.

Due to high rates of COVID-19 infection, no concerts could be performed before audiences until Jan. 18, 2021 in Austria. To ensure the safety of the New Year's Concert, musicians and staff of the Vienna Philharmonic were being subjected to a regime of daily COVID-19 test.

Though there was no in-house audience this year, classical music lovers worldwide were still able to enjoy the concert and applaud the musicians from their homes.

About 7,000 people from more than 90 countries and regions, including China, registered online to send audio broadcasts of themselves applauding from their homes. The recorded applause was played several times through the sound system in the "Golden Hall". All musicians there and an estimated 30 million to 50 million online audience were able to share their delight.

When conductor Muti raised his baton, it marked the sixth time that he has conducted this prestigious New Year's concert.

At the concert, Muti talked about joy, hope, peace, brotherhood, and Love with capital L, saying that the world needs to consider culture as one of the primary pre-measure elements to help build a better society in the future. 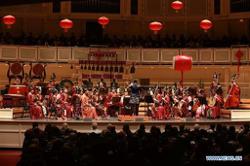