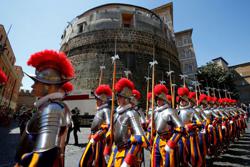 The main target is the Secretariat of State, the most important part of the Vatican administration, which must relinquish management of its funds, investments and real estate and submit to supervision by two other economic offices.

Published on Monday and signed by the pope on Dec. 26, the decree takes effect over two months from Jan. 1.

In 2014, the Secretariat invested about 200 million euros ($244 million) as a partner in a deal to buy a luxury building in London. As the deal became onerous, it paid tens of millions of fees to middlemen in attempts to change the terms.

An investigation into the London deal led to the suspension last year of five Vatican employees, four from the Secretariat. The Vatican has also accused the middlemen of extortion.

The Secretariat of State's assets are being transferred to a department called Administration of the Patrimony of the Holy See (APSA) and will be overseen by the Secretariat for the Economy.

The Secretariat of State also loses control of "Peter's Pence", a fund which the faithful can contribute to and is aimed at helping the pope run the Church and finance his charities.

In past years, the Vatican has dipped into Peter's Pence to cover budget deficits. The fund's reputation has suffered from reports it may have been used for questionable investments, such as the London building.

The decree sets up three new accounts - one for Peter's Pence, another for a "Papal Discretionary Fund", and a third to hold funds which donors want used for a specific purpose. To guarantee transparency, they will become part of the Vatican's budget, the pope said in the decree.

A Vatican statement said the changes to Peter's Pence were meant to reassure donors that contributions were properly used.