One missing, 5 injured following explosion and collapse of building in Lisbon

LISBON, Dec. 20 (Xinhua) -- One person is missing, five others were injured -- one in serious condition -- during an explosion followed by fire on Sunday in a building on Rua de Santa Marta, central Lisbon.

Hours after the incident, searches are still ongoing for a resident of the building who has not yet been located by the civil protection authorities.

Tiago Lopes, commander of the fire brigade, informed that the fire has already been extinguished and there is no danger of the fire reaching adjacent buildings.

"If the dogs do not detect any life, we have to enter, to remove the rubble meticulously so as not to create further damage to the neighboring buildings," said the commander.

According to Carlos Castro, councilor of Civil Protection of the Lisbon Chamber, four people who were injured have been discharged from the hospital, only the seriously injured remain there.

Preliminary assessment indicated that the adjoining buildings "present structural damage, but there is no risk of collapsing," he said.

Castro noted that the explosion may have been caused by gas. 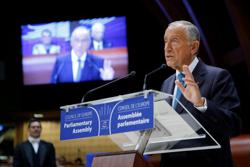