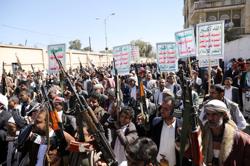 ADEN, Yemen -- A total of nine workers were killed when Houthi rebels shelled an industrial compound in the country's Red Sea port city of Hodeidah on Thursday evening, a government official told Xinhua.

Medical sources confirmed to Xinhua that the number of victims is likely to increase due to the intense Houthi shelling against the industrial facility.

More than 21 injured workers were transferred to nearby medical centers controlled by the government forces on Hodeidah's outskirts, according to the local sources. (Yemen-Houthis-Shelling)

TEHRAN -- The tally of confirmed COVID-19 cases in Iran, the worst-hit country in the Middle East, crossed the threshold of 1 million on Thursday.

Iran, one of the most populous countries in West Asia, has been placed between a rock and a hard place by the surging coronavirus pandemic and the embargoes unilaterally slapped by the United States. (Iran-Coronavirus-Cases)

CAIRO -- Egyptian Foreign Minister Sameh Shoukry and his German counterpart Heiko Maas have discussed the recent regional developments and bilateral cooperation on Thursday, according to a statement by Egypt's foreign ministry.

In a phone call, the two top diplomats voiced rejection to any kind of foreign intervention in Libya, said Ahmed Hafez, spokesperson of the ministry.

They also stressed the importance of reaching a comprehensive political solution to the Libyan crisis to preserve unity, stability, and safety. (Egypt-Germany-Ties)

JERUSALEM -- Israel is likely to face a fourth election in the coming months, after a preliminary vote to dissolve Israel's parliament, the Knesset, passed on Wednesday, said analysts.

An election could be scheduled as early as March 2021, which will be the fourth time that Israelis will head to the polls within the last two years. The last election held in March this year resulted in the formation of a wobbly coalition government with two unlikely partners.

The government, led by Prime Minister Benjamin Netanyahu and head of the Blue and White party Benny Gantz, has been unstable from its inception in May. Formed in order to confront the COVID-19 crisis, the two failed to cooperate on major hurdles facing the country. (Israel-Election-Parliament)