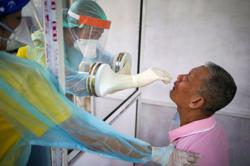 FILE PHOTO: Medical personnel perform a nose swab test on a local resident of a community in Bangkok, amid the coronavirus disease (COVID-19) outbreak in Thailand, April 28, 2020. REUTERS/Athit Perawongmetha/File Photo

BANGKOK (Reuters) - Thailand was racing to track down about 200 people in its northern provinces on Monday to stop a potential coronavirus outbreak, after three Thai nationals entered the country illegally from Myanmar and tested positive days later.

There were 356 people in Chiang Rai and Chiang Mai provinces potentially exposed, among them staff and customers of a hotel, shopping mall, cinema, restaurants and passengers in a van and taxi, Prachon told a news conference.

Thailand has strict measures and border controls to keep the coronavirus at bay having kept its cases to less than 4,000 and deaths at 60, although its tourism-reliant economy has suffered badly.

Most infections in recent months have been imported and found in government quarantine, with only a handful of community-transmitted cases reported, which each saw massive contact-tracing efforts launched.

So far more than 150 people in the northern provinces have been found and tested negative, senior health official Sopon Iamsirithaworn said in a separate news conference.

The first of the three new cases arrived on Nov. 24 in Chiang Rai and travelled to Chiang Mai, where she later showed coronavirus symptoms and went to hospital.

Two others who worked in the same entertainment venue in Myanmar returned on Friday. They stayed at a local hotel and later sought COVID-19 tests, which were positive. 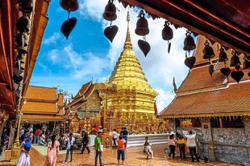