In rebuke to Orban, Merkel says rule of law was no backdoor addition FILE PHOTO: German Chancellor Angela Merkel and Hungarian Prime Minister Viktor Orban leave after their news conference as they visit the Hungarian border town of Sopron, to mark the beginning of the fall of the Iron Curtain thirty years ago, in Hungary, August 19, 2019. REUTERS/Bernadett Szabo

BERLIN (Reuters) - Suggestions that a requirement of adherence to the rule of law were introduced into proposals for the next European Union budget secretly, over the objections of some leaders, are not true, German Chancellor Angela Merkel said on Monday.

In an implicit rebuke to Hungarian Prime Minister Viktor Orban, who last week accused the European Parliament of adding a stipulation that payment of EU funds can be frozen if recipient countries do not reach minimum rule of law standards, Merkel said this had been the intention from the very beginning.

"I do want to make quite clear that the idea that linking conditionality with the budget was brought in by the back door - that is not true," she told a video conference of legislators from across the continent. 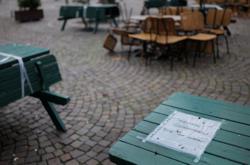 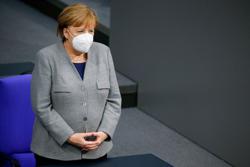