The GIMBE Foundation, a health sector observatory group, reported Thursday that for the first time since the start of the second coronavirus wave in September, the weekly number of infections declined, totaling 216,950 for the week ending Nov. 24, a decline from the previous weekly total.

But GIMBE Foundation President Nino Cartabellotta warned that the apparent progress on the infection rate did not mean the government should ease coronavirus health restrictions when it releases its next coronavirus decree on Dec. 3.

"An imprudent relaxation of the measures risks a new inversion of the curve by the end of the year, which, as we all know, could again overload hospitals at a time when the seasonal flu is on its way," Nino Cartabellotta said.

Health Minister Roberto Speranza made a similar point, telling news agency ANSA, "We cannot afford another wave at the beginning of 2021, and so we must maintain the highest level of prudence."

In contrast to the infection rate, deaths from the pandemic continued to rise. Italy's Ministry of Health recorded 822 deaths over the 24-hour period ending Thursday. That is still below the one-day record high of 921 recorded in March, during the first wave of the outbreak, and 853, the peak of the second wave recorded Tuesday. But it is up from 722 a day earlier and part of a clear rising trend over the last two weeks.

Other key indicators that are positive include 24,031 recoveries declared on Thursday. Although the number is still below the one-day infection rate, it is one of the highest one-day recoveries on record. That brought the total number of recovered individuals to 661,180.

Patients in intensive care units declined for the fourth time since mid-October, totaling 3,846, two fewer than on Wednesday.

Schools reopening -- currently, only students aged 10 or below are attending in-person classes -- and vaccines distribution, once available, continued to be hot topics in the Italian media.

Massimo Galli, one of Italy's most well-known virologists and director of the Department of Biomedical and Clinical Sciences at L. Sacco Hospital in Milan, floated the idea of an "immunity license" that would allow vaccinated individuals to travel freely.

"We have to start thinking about what happens when the vaccines become available," Galli said.

According to epidemiologist Giovanni Rezza, head of the National Institute of Health (ISS) Infectious Disease Department, in order for the country to have herd immunity, 60 to 70 percent of the population -- equivalent to at least 42 million people -- would have to be vaccinated. "This is one of the next great challenges," Rezza said.

As the world is struggling to contain the pandemic, countries including Italy, Germany, China, Russia, the United Kingdom and the United States are racing to find a vaccine.

According to the website of the World Health Organization, as of Nov. 12, there were 212 COVID-19 candidate vaccines being developed worldwide, and 48 of them were in clinical trials. 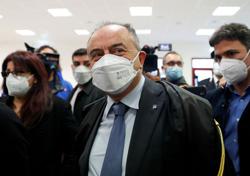