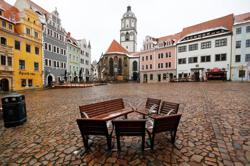 A person walks towards the weekly market, as the spread of the coronavirus disease (COVID-19) continues in Hildburghausen, Germany, November 26, 2020. REUTERS/Timm Reichert

BERLIN (Reuters) - The number of COVID-19 infections in Germany surpassed the one million mark and the daily death toll hit a record of 426, data from the Robert Koch Institute (RKI) for infectious diseases showed on Friday.

The figures reflected the reality that Germany was at best keeping new infections stable, which Chancellor Angela Merkel has said would not suffice to ease restrictions and eliminate the risk of overwhelming hospitals.

That was 842 fewer new cases than a week ago.

Bars, restaurants, theatres and fitness studios are closed but schools and shops remain open. From Dec. 1, private gatherings will be limited to five people from currently 10.

Over Christmas, that number will rise to 10 again in most of the 16 federal states, not counting children under 14, although families are asked to avoid social contact for a week ahead of visits.

The capital Berlin, one of the hardest hit cities in Germany, has said it would not ease restrictions over Christmas.

Germany will probably have to stick with measures to dampen the coronavirus pandemic into January, Merkel said on Thursday, while her chief of staff suggested that restrictions might be needed until March.