Thursday's count took France's total number of infections since the outbreak to 2,183,660. The daily tally was down by 2,719 from a day before. Another 339 people died from the coronavirus, bringing the toll to 50,957.

Early Thursday, Prime Minister Jean Castex told reporters that pressure from the epidemic is weakening more in France than in other European nations.

The virus reproduction rate, the "R" rate, is now at 0.65 countrywide, the same level France had reached when it emerged from a three-month confinement in mid-May, he added.

Starting from Saturday, non-essential shops in France will reopen under strict health protocol. Stores must respect the rule of one client for every 8 square meters of floor space, put in place one-way circulation and ventilate their premises.

Indoor religious services with 30 worshippers would be allowed. People would be allowed to go outdoors for three hours instead of one hour now and within a 20-km radius of their homes. However, people should continue to sign a document to go out.

Restaurants, bars, cafes and gyms would have to stay shut until Jan. 20 to avoid a third epidemic wave.

"The situation is improving but remains fragile...We cannot lower our guard. Our objective is to allow a gradual return to a more normal life, to allow you to spend the holiday season with your loved ones while minimizing the risk of a resurgence of the virus," Castex said.

As the world is caught in the second wave of the COVID-19 pandemic, countries including France, Italy, China, Russia, Britain and the United States are racing to find a vaccine.

In France, the vaccination campaign would start at the end of December or early January, provided its efficacy and safety are approved by regulators. The government will detail its vaccination program next week, said Health Minister Olivier Veran.

According to Arnaud Fontanet, a government scientific adviser, up to 90 percent of the 67 million population should be vaccinated to enable the return to normal life by next autumn.

"This is an extremely ambitious objective given the scepticism towards vaccines," Fontanet told BFMTV news channel.

An Elabe survey released on Thursday found that 48 percent of 1,003 respondents refused to get a COVID-19 vaccine if it became available, up by two points from the poll last week.

According to the pollster, six out of 10 French citizens opposed to making vaccination mandatory. 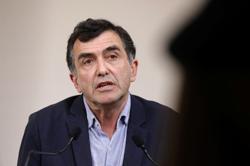