Wang said that after the establishment of the new Japanese government, Chinese President Xi Jinping and Suga reached important consensus on improving bilateral ties, which has enabled a stable transition for bilateral relations and provided a clear direction for developing bilateral relations in the next stage. (Japan-China-Ties)

KANDAHAR, Afghanistan -- At least 15 people were wounded in a car bomb explosion outside a police office in Kandahar city, capital of Afghanistan's southern province of Kandahar, on Wednesday, a provincial source said.

"The incident occurred roughly at 10:30 a.m. local time when a terrorist rammed an explosive-laden vehicle to the entrance gate of police station of Police District 11, and the explosion caused panic and destruction," a city security source told Xinhua anonymously. (Afghanistan-Explosion)

NEW DELHI -- India's COVID-19 tally reached 9,222,216 on Wednesday as 44,376 new cases were registered during the past 24 hours, said the latest data from the federal health ministry.

The official data showed that 16,001 samples were tested in the last 24 hours across Bangladesh. (Bangladesh-COVID-19) 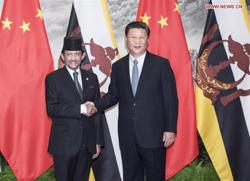