PRAGUE (Reuters) - The number deaths in the Czech Republic linked to COVID-19 doubled in November and passed the 7,000 mark, health ministry data showed on Saturday.

Recorded fatalities reached 7,021 as of Saturday, compared with the 3,523 recorded by the end of October, according to the figures.

The country, one of the worst hit in Europe by the pandemic, has seen a fall in the number of new cases and hospitalised patients in recent weeks, allowing the government to ease some curbs.

The health ministry reported 5,809 new cases for Nov. 20, less than a half the peak numbers seen at the turn of October and November.

The number of hospitalisations dropped to 6,307 compared with a peak of 8,283 recorded on Nov. 6. 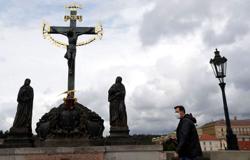