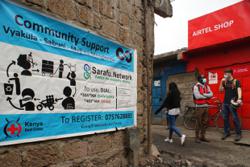 NAIROBI, Nov. 19 (Xinhua) -- Touted as one of the biggest sales bonanzas globally, the Black Friday wave is landing in Kenya again, throwing shoppers into frenzy as they sample a wide range of products in major retail outlets.

This year's Black Friday is set to be a special one, given that it is coming in the middle of a pandemic that has disrupted livelihoods.

Nevertheless, both small and medium-sized enterprises in Kenya are riding on this wave hoping to revive fortunes by offering their clients significant discounts in their online as well as brick and mortar stores.

"We are offering up to 70 percent discount on all available merchandise in the store, the decision was informed by low sales occasioned by COVID-19 pandemic," said Bobby Bachu, director, Timeless Gifts.

Aside from aiding our recovery, "the discount will also create visibility for our shop," he added.

Bachu's store which is domiciled in Nairobi's Garden City mall is among several malls across the country that are offering sale deals, free vouchers among other tempting offers on furniture, apparels, and beauty products to woo customers.

Other notable malls like Two Rivers Mall, the biggest mall in the country, is teeming with posters announcing slashed prices on luxury goods.

The Hub, Village market and the Junction shopping mall, all premium shopping malls have leveraged on their websites and social media sites to advertise their bargains.

Bachu said he has been offering the Black Friday deals every year since he first opened his shop.

He revealed that he is already guaranteed a 30 percent increase in sales during this period though his expectations this year are muted.

The wares in Bachu's outlet include designer watches, perfumes among other high-end gifts.

It is believed that the shopping spree day originated in the USA, as it comes a day after the Thanksgiving holiday celebrated in America. This year's Black Friday falls on Nov. 27.

Carol Wanjiku, a marketer and business proprietor said that the globalization of shopping events such as "Singles Day," held on Nov. 11 every year as the world's biggest 24-hour online shopping event, and Black Friday have greatly influenced the growth of E-commerce.

She admitted to having been compelled by changing shopping practices to tap into e-commerce to create a wide reach for her hairline.

"This year, a substantial number of businesses are betting on these global shopping events to boost earnings especially with the lull that was experienced earlier in the year," she added.

Unlike other businesses that were unable to sustain operations of physical stores when COVID-19 hit, Wanjiku remained operational and is currently banking on the shopping craze to boost returns.

At the same time, regional e-commerce giant Jumia is offering discounts on select items on its platform.

Dan Kaka who operates a Jumia pick-up and order store within Nairobi said there has been an influx of parcels in November with a climax expected on the last Friday of the month.

"I am receiving ten parcels a day, a huge increase from the previous months where the number was half of that figure," said Kaka.

Sheila Kamau, said she planned to maximize on discounted prices on all the e-commerce platforms at her disposal owing to her demanding duty of taking care of her child.