STOCKHOLM (Reuters) - Sweden should rethink its decision not to recommend the use of face masks to prevent the spread of the novel coronavirus amid a second wave of infections, the Royal Academy of Sciences, which awards the Nobel prizes, said on Thursday.

Sweden's soft-touch pandemic response has focused mostly on voluntary social distancing and the Public Health Agency has cast doubt on the effectiveness of face masks, which are mandatory in many public places in Europe.

However, a report on Thursday by the Royal Academy of Sciences said that face masks could play a role in reducing infection, particularly in enclosed spaces.

"I hope there is now a debate and leaders, irrespective of what the public health authority is saying, will take this to heart," Staffan Normark, who heads the Academy's expert group on Covid-19, said.

Few Swedes wear masks in public, while politicians also generally avoid them when making public appearances - a radical gesture in some countries.

The Public Health Agency has said that face coverings risk giving the wearer a false sense of security, which could undermine social distancing.

With new cases of the virus recently hitting record levels, Sweden introduced its toughest measures so far during the pandemic earlier this week, cutting public gatherings to a maximum of eight people.

Sales of face masks are also increasing, with pharmacy Apotea reporting sales up 360% in November compared to October.

More than 6,300 Swedes have died from COVID - a per capita rate several times higher than that of its Nordic neighbours, if somewhat lower than some larger European countries such as Spain 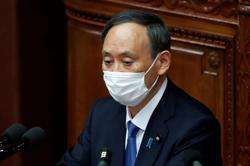