BERLIN, Nov. 17 (Xinhua) -- German police on Tuesday arrested three people on suspicion of being involved in a jewelry heist at Dresden's Green Vault almost one year ago, the city's public prosecutor's office and the police announced in a joint statement.

At the end of November 2019, thieves entered the Green Vault, a famous museum in Dresden, through a window and stole many historical pieces including priceless diamond jewelry. The thieves managed to flee by car before setting the vehicle on fire in an underground parking lot.

The stolen pieces have not been found as of yet and the operation on Tuesday focused on the search for the stolen art treasures as well as possible evidence, such as storage media, clothing and tools, according to the statement.

The surveillance cameras of the Green Vault were an essential part of the investigation and had recorded the suspected thieves from various angles. "We were able to identify the accused relatively well," said senior public prosecutor Juergen Schmidt during a press statement on Tuesday.

The arrests were made in the course of a large-scale police raid with more than 1,600 police officers from all across Germany. The searches of 18 properties, including apartments, garages as well as vehicles in Berlin started in the early hours of Tuesday.

One of the arrested suspects was already convicted of the theft of a 100-kilogram gold coin from the Berlin Bode Museum in 2017, according to Schmidt. 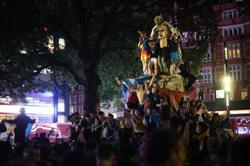