JAKARTA (Reuters) - A 6.3-magnitude earthquake struck off the coast of Indonesia's West Sumatra province on Tuesday, Indonesia's meterological, climatology and geophysical agency said in a tweet on its official account.

The agency said that no tsunami warning had been issued for the earthquake, which occurred more than 100 kilometres (62.14 miles) from land and at a depth of 10 km.

The European-Mediterranean Seismological Centre downgraded its magnitude for the quake to 5.8 from 6.2 initially. 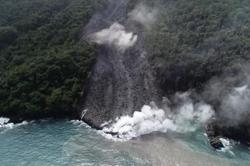