MELBOURNE (Reuters) - An Australian state anti-corruption watchdog said on Thursday it would not investigate media reports of money being transferred from the Vatican to Australia during the prosecution of former Vatican treasurer George Pell.

The Australian Federal Police had referred some aspects of the matter to the Independent Broad-based Anti-corruption Commission (IBAC) in Victoria, which investigates misconduct by state government and police.

"IBAC has reviewed the information and found the threshold to commence inquiries or an investigation was not met," IBAC said in a statement on Thursday, adding it had only received information based on media reports.

"This matter would only be further considered if any additional, credible information is received relevant to IBAC's jurisdiction," the commission said.

Pell was convicted in December 2018 of sexually assaulting two choir boys. His conviction was overturned in April after he served more than a year in jail.

Victorian Police said in October that they, too, were not conducting any investigation into the "transfer of monies from the Vatican over a period of time to Australia".

Police said while Australia's financial crimes watchdog had made them aware of the transfers, it had not advised them of any suspicious activity related to the transactions. 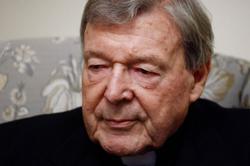