By Christian Lowe and Anthony Boadle Simone Barreto Silva, named by French media as one of the victims of a deadly knife attack at the Notre Dame church in Nice, is seen in this handout image obtained by Reuters on October 30, 2020. SIMONE BARRETO SILVA/Handout via REUTERS

PARIS/BRASILIA (Reuters) - One of the victims of Thursday's knife attack in a French church was able to stagger out and raise the alarm before she died from her injuries.

She was 44-year-old mother-of-three- Simone Barreto Silva, who moved to France from Brazil as a teenager, loved dancing samba, and displayed a devotion to Jesus Christ.

"She crossed the road, covered in blood," said Brahim Jelloule, manager of the Unik cafe which is across the road from the church's side entrance in the Mediterranean city of Nice.

Jelloule said his brother, who was working in the cafe at the time, and an employee, saw Silva and brought her inside.

"To begin with, they couldn't understand anything. She was still talking, she was saying that there was someone inside (the church)," Jelloule said in an interview with the France Television broadcaster.

Silva was one of three people killed in the knife attack. The others were Vincent Loques, the sexton of the church, 55, who had his throat slit, and a 60-year-old woman who was beheaded. She has not been named.

The suspected attacker, identified by prosecutors as Brahim al-Aouissaoui, from Tunisia, was shot and wounded by police who arrived on the scene when the alarm was raised. He is being treated in hospital.

Silva was originally from Bahia, in northeast Brazil, but as a young woman moved to France and studied at Nice Sophia Antipolis University, according to her Facebook profile. She trained as a chef but had lately been working as a care assistant, French media reported.

The picture on her Facebook profile had an image of Jesus Christ and the words, in French: "I am the one who loves you." She also posted prayers in Portuguese.

Though she was a long-term resident in France, she kept her Brazilian ties. Her sister, Solange Barreto, also lives in France and helps organise an annual Brazilian cultural festival in Nice.

A musician friend of the dead woman, percussionist Jorge Bezerra, told Brazil's Folha de S.Paulo newspaper that Silva danced samba and had been in shows at Brasil Tropical, a Brazilian cabaret in Paris.

Solange Barreto updated her Facebook profile picture late on Thursday to show a black rose and a black ribbon, symbols of mourning.

In a statement, Brazil's Foreign Ministry said its embassy in Paris was providing assistance to the dead woman's family.

"Brazil expresses its firm repudiation of any and all forms of terrorism, regardless of its motivation, and reaffirms its commitment to work to combat and eradicate this scourge," the statement said.

"At this moment, the Brazilian government expresses in particular its solidarity with Christians and people of other denominations who suffer persecution and violence due to their belief."

(Reporting by Christian Lowe in PARIS and Pedro Fonseca and Gabriel Stargardter in Rio de Janeiro; Editing by Janet Lawrence) 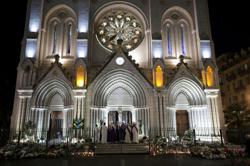