ROME, Oct. 26 (Xinhua) -- The number of new coronavirus infections in Italy declined for just the second time in 13 days, amid the application of stringent new limits on activities across the country and warnings that the worst for Italy may be yet to come.

Italy's Ministry of Health on Monday revealed that 17,012 residents had been recorded as infected in the last 24 hours by COVID-19, the disease caused by the coronavirus. That is a dramatic drop compared with the record high of 21,273 recorded on Sunday.

The ministry reported that COVID-19 had claimed 141 lives over the last day.

Italian Prime Minister Giuseppe Conte announced on Sunday that pubs, bars, restaurants, and ice cream shops must shut down at 6 p.m. as part of new measures to contain the coronavirus pandemic. The new measures will go into effect from Sunday midnight through Nov. 24.

The reaction to the new measures around Italy was mixed, with protests held against the new rules in several cities including Rome, Naples, and Catania, and the Italian Stock Exchange in Milan opening trading Monday nearly 2 percent lower in response to the new measures. Cinema operators complained against the reclosure of their facilities, saying they observed social distancing and other health rules and that there was no reason to see cinemas as potential spreader risks.

The measures are expected to cost restaurant owners who must now close at night an additional 2.7 billion euros (3.2 billion euros), according to various news sites. The newspaper Corriere della Sera reported that several of Italy's best-known chefs, including Massimo Bottura and Max Mascia, complained they were being "punished for the negligence of others." Mascia said that "restauranteurs who respect the rules should be allowed to work."

Meanwhile, health officials were split between supporting the latest round of restrictions and those who said they were not sufficient.

"I don't know if the new rules will be enough and anyone who says they know is lying," Massimo Galli, director of the Institute for Biomedical Science at the Sacco Hospital in Milan, told Italian reporters. "The only thing we can say is that we are doing our best to avoid a total closure."

Walter Ricciardi, a senior Ministry of Health consultant, was not so sure.

"The latest measures ... are a step forward, but they are not sufficient to address the spread of the virus," Ricciardi told the news agency ANSA.

Antonella Viola, an immunologist, said the decision to close bars, restaurants, theaters, cinemas, and gyms would be ineffective while sparking social tension, according to the news site Today.

Italian Health Minister Roberto Speranza said that these are "difficult days" but warned that things will get worse if the rules are not obeyed widely.

In some cases, communities have taken measures into their own hands, with Milan Today reporting that that city -- the hardest-hit major city in Italy -- launched a portal to record positive cases of the coronavirus as a way to compensate for a lack of traditional contact tracing.

Giovanni Sebastiani, an expert in medical statistics, called for calm, according to the news site Open Online. Sebastiani noted that for every 100 hospitalized cases 16 patients were in intensive care back in March, during the first wave of the pandemic. That number is now 11. "The numbers are certainly better than they had been," he said.

Despite the dramatic increase in infections, other data appear more positive than the first wave of the pandemic in March and April. In addition to the percentage of patients in intensive care units mentioned by Sebastiani, the mortality rate remains far below the peak of nearly 1,000 per day in the spring.

Each day, around 2,000 patients are declared cured of COVID-19, far higher than levels during the worst part of the first wave. Over the last 24 hours, there were 2,423 new recoveries, bringing the overall total to 268,626, according to the Italian Health Ministry.

As the world is struggling to contain the COVID-19 pandemic, countries including Italy, France, China, Russia, Britain and the United States are racing to find a vaccine. According to the website of the World Health Organization, as of Oct. 19, there were 198 COVID-19 candidate vaccines being developed worldwide, and 44 of them were in clinical trials. 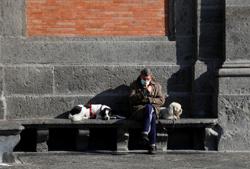