By Sergio Goncalves and Victoria Waldersee

LISBON (Reuters) - Portugal's national health minister warned on Monday that the country's national health service was under grave pressure and that further restrictive measures could be coming as the number of patients in intensive care approached record levels.

"Although the Portuguese and the national health service are better prepared to respond to the pandemic than before, the situation in Portugal - as in other places - is grave," health minister Marta Temido told a news conference.

The government "is ready to cover possible new municipalities with more restrictive measures," she added.

Three municipalities in the country's North went into partial lockdown last Thursday, and non-essential travel between regions was banned from Oct. 30 to Nov. 3 to reduce the risk of transmission during the All Saints national holiday.

The health system, which prior to the pandemic had the lowest number of critical care beds per 100,000 inhabitants in Europe, could accommodate a maximum of 800 COVID-19 patients in ICUs, Temido said.

Given current trends, over half that figure would be reached by next week, the minister cautioned.

Recent numbers of new daily cases - reaching 3,669 on Saturday - have approached triple the country's previous peak in April, but testing has also multiplied by around the same proportion.

Parliament voted on Friday for masks to be compulsory in public spaces where social distancing is difficult for a period of 70 days, a measure which will soon come into law. 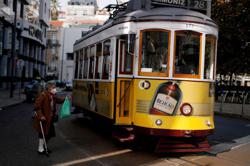