PARIS (Reuters) - France is not planning a reciprocal boycott against Turkish products and will continue talks and relations with Turkey and its president, Trade Minister Franck Riester said on Monday.

"There is no retaliation on the agenda," Riester told RTL radio. He nevertheless reiterated the government's condemnation of Turkish President Tayyip Erdogan's recent comments about President Emmanuel Macron and his treatment of Muslims in France.

Erdogan urged compatriots on Monday to stop buying French goods, joining calls around the Muslim world for a consumer boycott in protest over images being displayed in France of the Prophet Mohammad that Muslims see as blasphemous. 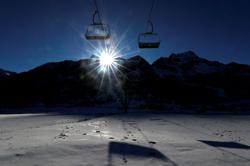