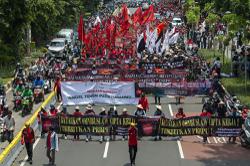 "It is the exploitation of labour that we're against," said the head of the Confederation of Indonesian Trade Unions, Said Iqbal. "We are ready for dialogue, even ready for a debate if necessary in an open, public hearing."

The government says the legislation will boost employment by cutting red tape, easing restrictions of foreign investment and improving labour market competitiveness. Unions and rights groups say the measures favour business over workers and the environment.

Hundreds of thousands of Indonesians have hit the streets across the archipelago in recent weeks, culminating in sporadic violence and thousands of arrests, as they protested the measures passed by parliament on Oct. 5.

If the president, widely known as Jokowi, signs the measures into law, as expected, on Wednesday, labour unions will stage "massive national" protests on Nov. 1, centred on the State Palace and Constitutional Court in the capital Jakarta, Iqbal told a virtual news conference.

Tens of thousands would be expected to gather in Jakarta and hundred of thousands more across the country, he said.

Spokesmen at Jokowi's office, Jakarta police and Indonesia's economic ministry did not immediately respond to requests for comment.