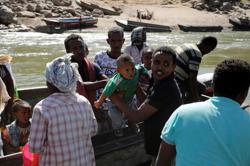 ADDIS ABABA, Oct. 23 (Xinhua) -- As Ethiopia strives to revive its business and investment from the brunt of COVID-19, the engagement of Chinese companies is powering the country's ambition.

According to recent figures from the Ethiopian Investment Commission (EIC), Ethiopia has secured 500 million U.S. dollars from foreign direct investment in the past three months, in which the manufacturing, agriculture and service sectors account for the highest share of revenue obtained in the first quarter of the Ethiopian fiscal year, which started on July 7.

"For us, the revenue generated during the quarter was not bad as we have been confronting the challenges posed by COVID-19 which is currently affecting the sector even at the international level and the conflicts being observed in some parts of the country," EIC Commissioner, Lelise Neme, told journalists earlier this week.

According to Neme, as the country strives to attract more FDI despite the economic impacts of the COVID-19 pandemic, Chinese companies have been also an integral part of Ethiopia's endeavors to ease the impact of COVID-19 on the investment sector.

The EIC commissioner told journalists that various manufacturing companies are now producing face-masks, gloves and COVDI-19 testing kits that helped the sector to shoulder the impact of the pandemic.

Among the Chinese companies that are presently engaged in Ethiopia's anti-COVID-19 mitigation efforts is BGI Ethiopia, a subsidiary company of China's biotech giant, BGI Genomics Co. Ltd., which has commenced production of COVID-19 test kits in the country.

Tadesse said during a meeting held in the Ethiopian capital Addis Ababa evaluating Ethiopia's eight months' performance in the fight against the spread of COVID-19 disease.

The factory, located inside the Bole Lemi industrial park on the outskirts of Ethiopia's capital Addis Ababa, was inaugurated in September.

According to figures from the Ethiopian Investment Commission (EIC), Chinese companies have executed about 1,564 investment projects that are presently either operational or under implementation during the past two decades, from 1998 to March 2020.

Out of the 1,564 projects, some 1,133 projects are engaged in the manufacturing sector, which is a major priority investment area by the Ethiopian government, according to Hailu.

Other major investment project areas for Chinese investors in Ethiopia are said to be the construction and real estate development, hotel, agriculture, tour operations, communications, education and mining sectors, it said.

Figures from the EIC also showed that these projects registered an accumulative investment capital worth over 43.1 billion Ethiopian birrs (over 1.153 billion U.S. dollars).

Speaking to Xinhua recently, EIC Communications Director, Mekonnen Hailu, also stressed that the "participation of Chinese investors is increasing from time to time. In the near future, we expect the engagement of the Chinese companies would be very great."

"Chinese companies play an important role in the development of this country. Due to the good economic cooperation between the two countries, the Chinese also prefer Ethiopia and they feel at home, and they are doing lucrative business, which is win-win for both countries," Hailu told Xinhua in a recent interview.

Noting that most of the industrial parks in Ethiopia were constructed by Chinese companies, Hailu stressed that Ethiopia is becoming one of the best investment destinations for foreign investors.

"This is also evident that most of the Chinese companies are engaged in the manufacturing sector, which plays an important role in the advancement of this country," he added.