WARSAW (Reuters) - Polish police detained 15 people after protests in Warsaw late on Thursday against a near-total ban on abortion, a police spokesman said on Friday.

Poland's Constitutional Tribunal ruled on Thursday that abortion due to foetal defects was unconstitutional, banning the most common of the few legal grounds for ending a pregnancy in the largely Catholic country. 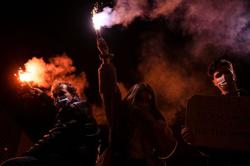