"The cities argue the executive branch lacks authority to add conditions to congressionally appropriated funds without congressional authorization, and that the designation was made in an arbitrary and capricious manner based on a set of vague and subjective factors entirely within the U.S. Attorney General's discretion," said a press release issued by New York City government, concerning the memorandum titled "Reviewing Funding to State and Local Government Recipients of Federal Funds That Are Permitting Anarchy, Violence, and Destruction in American Cities."

In the lawsuit, the three cities challenged the proposed action on five different grounds, including violation of the Separation of Powers and the 10th Amendment of the U.S. Constitution. The cities asked the federal court to remove the cities' "anarchist jurisdiction" designations and prohibit the U.S. Department of Justice and Office of Management and Budget from carrying out the administration's scheme, according to the release.

"President Trump's attempt to take money from great American cities like New York, Portland and Seattle is not only based on lies, it is unconstitutional," NYC Mayor Bill de Blasio was quoted as saying.

"While we have been laser-focused on responding to the COVID-19 pandemic, the president is using his budget office to play politics and distract from his own failures as Commander-in-Chief. We are confident the court will agree that the president's attempt to withhold funds is without merit," he added.

Seattle Attorney Pete Holmes and Portland Mayor Ted Wheeler were also quoted in the release as objecting the memorandum.

The president's memorandum said that "Federal Government provides States and localities with hundreds of billions of dollars every year, which fund a wide array of programs, such as housing, public transportation, job training, and social services," and noted that the "Administration will not allow Federal tax dollars to fund" what it deems "anarchist jurisdictions." 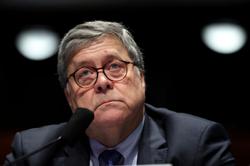