BANGKOK (Reuters) - A few dozen Thai royalists held a rally in Bangkok on Wednesday in the face of protests against the government and the monarchy that have drawn tens of thousands of people to the streets in defiance of an official ban.

Protest groups also urged supporters to demonstrate for a seventh day by gathering at 4 p.m. (0900 GMT).

The royalists said they had no problem with protesters calling for the removal of Prime Minister Prayuth Chan-ocha - a former military ruler - but they should not touch on King Maha Vajiralongkorn.

"I beg you, do what you will, but do not touch the monarchy," one of the royalists, Sirimongkol Ruampan, 24, told Reuters. "I don't believe in violence. I beg again, don't bring the monarchy into politics."

Royalists, most of whom wore yellow, the king's colour, said their gathering was not political and so not subject to the ban on gatherings of more than five people imposed by the government last week.

Police spokesman Yingyos Thepjumnong told reporters that all groups would be treated the same.

"We are ready for big surprises every day," he said. "We need to balance law enforcement with social peace and safety, no matter at whose gatherings."

Pro-royalist groups took to social media using a hashtag that translates as #WeLoveTheMonarchy to proclaim their loyalty, but it was hijacked by supporters of the protests posting anti-royalist messages.

The protests have become the biggest challenge to Thailand's establishment in years and have drawn the most open opposition to the monarchy in decades despite lese majeste laws setting jail terms of up to 15 years for insulting the monarchy.

When protests began in July, they originally demanded a new constitution and the departure of Prime Minister Prayuth, accusing him of keeping hold of power last year by engineering an election that he says was fair.

The demands for changes to reduce the monarchy's powers came later.

The Palace has a policy of making no comment to media and has made no comment on either the protests or the demands of the protesters. 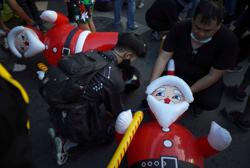