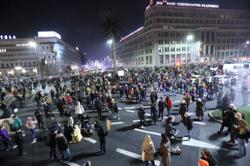 PRAGUE (Reuters) - The Slovak parliament on Tuesday narrowly rejected a motion by conservative lawmakers to tighten abortion rules, a proposal that was harshly criticised by women's rights groups.

The proposed amendment, defeated by a 59-58 margin, would have still allowed abortion on demand until 12 weeks into a pregnancy but would have doubled waiting periods to 96

hours, banned clinics from advertising services and made women

declare their reasons for termination.

The proposal drew concern not just in Slovakia but also its northern neighbour Poland, where rights activists say hundreds and possibly thousands of women cross the border to Slovakia every year for abortions that would be illegal at home.

Proponents of the proposal, mainly from a Christian faction within the ruling OLANO party, said it would help women make informed decisions and provide financial support

"Our proposal to help pregnant women did not go through. I regret that my colleagues did not, in this difficult economic situation, support those most vulnerable - pregnant women and children," the law's main author, OLANO-Christian Union deputy Anna Zaborska, said on her Facebook page.

"In six months we will submit our proposal again."

Opponents of the proposal including dozens of human rights groups said the amendment would put women under stress and might force some into accepting unsafe abortions.

Just 17% of people in Slovakia favour tougher abortion rules, according to a poll published in July.

Slovakia, unlike the neighbouring Czech Republic, is

majority Roman Catholic although the church is less influential

than in Poland, whose government is deeply conservative.