Azerbaijan accused Armenia on Wednesday of trying to attack its gas and oil pipelines and warned of a "severe" response, as tensions mounted over a fraying Russian-brokered ceasefire in the mountain enclave of Nagorno-Karabakh.

Turkey has accused Armenia of occupying Azeri territory and vowed full support for Azerbaijan. Ankara has repeatedly called on the Minsk Group, formed to mediate the conflict and led by France, Russia and the United States, to urge Armenia to withdraw from the region. 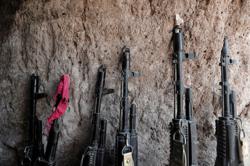