BERLIN, Oct. 8 (Xinhua) -- Around 18 percent of car owners in Germany plan to buy an electric or plug-in hybrid car as their next vehicle, according to a survey published by the price comparison website Verivox on Thursday.

In contrast, only 14.5 percent want to buy a car with a diesel engine, said the survey of 1,000 German car owners conducted by the market research institute Innofact.

"There are still many reservations about buying electric cars, but these are of a technical nature," Verivox noted. Car owners who did not want to buy an electric car cited low range, high purchase price and too few charging points as the main reasons.

The purchase of an electric or plug-in hybrid car is subsidized at a higher rate until the end of 2021 through Germany's economic stimulus package, which aims to mitigate the effects of the COVID-19 crisis. Pure electric cars would be subsidized with up to 9,000 euros (10,588 U.S. dollars), while the maximum subsidy for plug-in hybrids is 6,750 euros.

Nearly 20,000 applications for the purchase bonus were submitted in July, more than in any other month since the introduction of the subsidy in June 2016, Ministry for Economic Affairs (BMWi) said at the beginning of August.

New registrations of gasoline vehicles in Germany fell by 17.6 percent, but with 120,645 new vehicles and their share was still 45.5 percent in September, according to the KBA.

According to the Verivox survey, around 38 percent of car owners said they intended to buy a gasoline engine as their next vehicle. 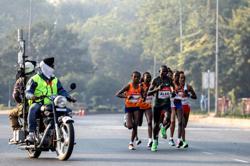