NEW YORK, Oct. 5 (Xinhua) -- Oil prices rose on Monday, recouping some of the heavy losses they suffered in the prior week.

The moves followed a setback on the oil market last week that saw WTI oil futures drop nearly 8 percent and Brent pull back more than 7 percent.

Crude prices found some support from reports that six Norwegian offshore oil and gas fields were shut as more workers joined a strike. 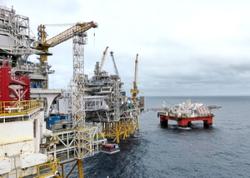