By Maria Vasilyeva and Tom Balmforth 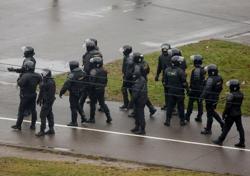 With applause and flowers, thousands attend funeral of Belarusian protester

People gather next to a wall with an opposition mural in Minsk, Belarus September 9, 2020. Tut.By via REUTERS

MOSCOW (Reuters) - When state workers accompanied by police painted over opposition graffiti on a wall in a Minsk courtyard in August, local residents swiftly painted it back.

The mural of two DJs who took part in protests against President Alexander Lukashenko has been erased and repainted more than a dozen times since then, a potent symbol of resistance that persists two months after a disputed Aug. 9 election.

It has become the centrepiece of what some local residents call the "Square of Change" and a microcosm of what they see as a grassroots struggle to force Lukashenko from power.

"It's become a symbol not only of our courtyard but of our entire country," said Nadezhda, 32, a programmer on maternity leave who lives nearby. She did not give her surname out of fear of reprisals as police continue to clash with protesters and arrest hundreds.

"If we abandoned it now it would be an admission we were in the wrong, that we should stop our protests..."

Lukashenko has said he won the election fairly and that anyone being jailed has broken the law. He has accused the West of organising the protests.

The standoff has changed the social fabric of the neighbourhood around the square and created a community of opposition-minded people, even as the leader of 26 years clings to power.

Largely strangers to each other until the protests broke out over the election, residents started to drape red and white opposition flags from their windows, chant "Long Live Belarus!" and play upbeat music from their parked cars.

The once-drab courtyard is now decorated with ribbons and balloons and has become a nightly venue for guitar-led, floodlit opposition concerts, tea parties and "bachata" dancing. People join in from neighbouring districts.

The two DJs featured in the mural gained cult status among Lukashenko's critics when they played "I want changes!" - a rock anthem of the Soviet "perestroika" period in the 1980s - at a pro-government rally. They were jailed for 10 days.

"We know they can come knocking at the door any moment," said Nadezhda. "And it's impossible to live like that. Which means we have no choice but to go to the very end."

One resident, Stepan Latypov, was arrested on Sept. 15 as he stood in front of the mural with several others to stop it being painted over.

He is being held on suspicion of involvement in mass protests and was accused on state television of planning to poison the police. His lawyer, Ilya Perkhalsky, said he was unable to comment on case details for legal reasons.

The Interior Ministry referred Reuters questions about Latypov and the courtyard protests to Minsk police. They could not immediately be reached for comment.

The political crisis is at an impasse, with protesters regularly coming out in large numbers even after Lukashenko was sworn in for a new term in a secretive ceremony. Many of his most prominent opponents have been jailed or fled.

"By now, no one is carrying placards with (exiled opposition leader Sviatlana) Tsikhanouskaya's name," said Yulia, 39. "That is behind us. We are standing up for freedom. We want us and our children to live peacefully and there is no peace." 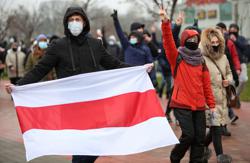 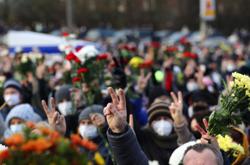 With applause and flowers, thousands attend funeral of Belarusian protester