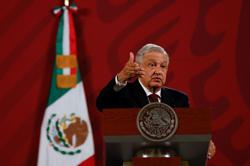 FILE PHOTO: Mexico's President Andres Manuel Lopez Obrador gestures as he speaks during the delivery of an investigation report with relatives of the 43 missing students of the Ayotzinapa Teacher Training College, marking the 6th anniversary of their disappearance, at the National Palace in Mexico City, Mexico September 26, 2020. REUTERS/Edgard Garrido/File Photo

MEXICO CITY (Reuters) - Mexican artists and human rights activists are protesting against a funding plan proposed by President Andres Manuel Lopez Obrador's ruling party, accusing the government of infringing on the independence of arts and science.

Opposition to the financial shake-up gained steam on Wednesday, a day after a committee of lawmakers approved a reform that would allow the interior ministry to control the funding of more than 100 public trusts, with a combined budget this year of 68,000 million pesos ($3 billion).

The reform would allow the ministry to redirect financing away from arts and media and toward other projects, such as the fight against the novel coronavirus.

The government says the plan, part of broader budget reform, is aimed at streamlining government financing to muster additional funds for health programs and the pandemic response without increasing Mexico's debt.

But researchers and artists, including award-winning actor Gael Garcia Bernal, object to the plan, saying it will leave funding for science, media, and human rights subject to the whims of political cycles.

"For academia in Mexico, it is a catastrophic scenario," said Alejandro Madrazo, regional director of the Center for Economic Research and Teaching (CIDE), a Mexico City-based think-tank.

Madrazo and other analysts interviewed by Reuters on Wednesday said that the elimination of the trusts is an effort to control the flow of resources, including to the critics of the president.

Several human rights groups, journalist protection organizations and gender equality initiatives have signed a petition seeking to protect the existing system, which they say was created to promote financial transparency.

The new proposal, promoted by the president and his Morena party, has yet to receive the approval of the full Congress or the Senate. 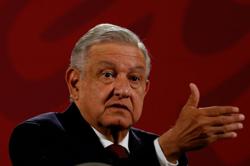 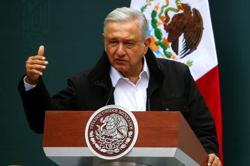 U.S. surpasses 2,000 COVID deaths in a day with hospitals already full
Special Report: To reopen or not to reopen - That is the fraught question for U.S. schools
Afghan migrant: I thought France was humane until police beat me
German restaurant bears out pandemic with furry customers
World agonises over new COVID curbs as infections approach 60 million
EU should postpone talk of rule of law, says Hungary's Orban
Did you know Nintendo’s Switch game console is now made in Malaysia?
EU seeks fast-track bypassing of pharma patents in emergencies
Canadian police supervisor who oversaw Huawei CFO arrest set for more questioning
Biden to discuss coronavirus response as Thanksgiving holiday nears