MADRID, Sept. 25 (Xinhua) -- The Madrid regional government said on Friday that it was extending the restrictions on mobility which came into effect last Monday in an attempt to control the spread of the coronavirus to a further eight health areas.

A health area is smaller than a city district and can include several primary health care centers.

The extension, which was announced by the Madrid region's deputy health chief Antonio Zapatero, means that 45 health areas, most of them in the south of the region, now have restrictions on movement in place, affecting around one million inhabitants.

Zapatero said the action had been taken with the aim of "stopping the spread of the coronavirus" in the region, which according the Spanish Ministry of Health has an incidence of 746.2 cases per 100,000 inhabitants.

In the affected 45 health areas, public parks are closed, while capacity at bars and restaurants is limited to 50 percent and these and other commercial establishments must close at 10 p.m.

Spanish Health Minister Salvador Illa also held a press conference on Friday, which overlapped with Zapatero's. Illa said he had expected tougher measures from Madrid in the wake of the meeting between the region's leader Isabel Diaz Ayuso and Spanish Prime Minister Pedro Sanchez on Monday.

Illa, who on Thursday said the capital was facing "difficult weeks" in its struggle to halt the spread of COVID-19, asked for tougher measures such as limiting movement in areas with an incidence of over 500 cases per 100,000 inhabitants. 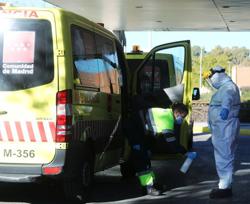