BEIJING, Sept. 25 (Xinhua) -- Water quality in the Bohai Sea in China has witnessed great improvement as progress is being made in pollution treatment, an environmental official said on Friday.

In the first and second quarter of this year, the proportion of first-class and second-class water quality sites in the Bohai Sea reached 79.4 percent and 81.6 percent, up by 9.4 percentage points and 2.2 percentage points respectively from a year ago, Huo Chuanlin, an official with the Ministry of Ecology and Environment, told a press conference.

Meanwhile, initial monitoring showed that 87.1 percent of the sites in the Bohai Sea coastal waters were of first-class and second-class quality in the third quarter, according to Huo.

In the first eight months of this year, the number of unqualified fifth-class quality water sections in rivers flowing into the Bohai Sea reduced from 10 to zero.

Three coastal provinces and one municipality along the Bohai Sea have kicked off more than 60 rehabilitation projects for coastal wetlands and coastlines, with more than 3,300 hectares of coastal wetlands recovered as of mid-August.

The ministry will work with other government departments and local authorities to push for progress in the improvement of the ecological environment in the Bohai Sea, said Huo.

China released an action plan in December 2018 on the comprehensive treatment of pollution in the Bohai Sea, setting the goal for the proportion of first-class and second-class water quality sites in the Bohai Sea coastal waters at around 73 percent by 2020.

The government earmarked more than 7 billion yuan (about 1.03 billion U.S. dollars) in pollution treatment in the Bohai Sea in 2019. 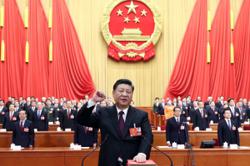