Han, also a member of the Standing Committee of the Political Bureau of the Communist Party of China Central Committee, made the remarks on Thursday during a meeting on promoting the integration of the delta.

Covering an area of 358,000 square km, the Yangtze River Delta is one of the most populated and urbanized city clusters in China, contributing a quarter of the country's gross domestic product.

Han said that the Yangtze River Delta region should give full play to the advantages of having a solid economic base, great market size, complete industrial and supply chains, and a high level of opening-up, and take the lead in forming the new development pattern in which domestic and foreign markets boost each other, with the domestic market as the mainstay.

Efforts should be made to expand high-level opening-up, support Shanghai's Pudong in acting as a forerunner in actively exploring and acquiring experience, and promote the high-quality development of pilot free trade zones, he said.

The vice premier called on the region to make increased efforts to tackle hard-nut problems in science and technology and achieve breakthroughs in key fields such as integrated circuits, biomedicine and artificial intelligence. Work related to a model area in the Yangtze River Delta on ecologically friendly development should be accelerated, he said.

The region should rule out using the real-estate market as a short-term measure to stimulate the economy, and further improve its emergency-response system for major emergencies, such as public health issues, Han said. 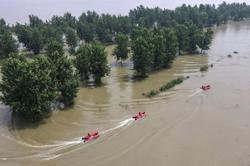