BERLIN, Sept. 22 (Xinhua) -- Nine of the top ten applicants for patents in batteries and other electricity storage technologies in the period from 2000 to 2018 were Asian companies, according to a study published by the European Patent Office (EPO) in Munich and the International Energy Agency (IEA) on Tuesday.

The leading applicants for patents in batteries and other electricity storage technologies were Samsung, Panasonic, LG, Toyota and Bosch, according to the study.

The German company Bosch was the only non-Asian representative among the top ten applicants for patents in battery technology, the study noted.

In terms of countries, Japan and the Republic of Korea were the leaders in the global race for battery technology. In 2018, more than a third of all battery-related IPFs were registered by Japanese companies and inventors, according to the study.

However, the Republic of Korea, China and the U.S. also "contributed significantly" to the global growth of battery inventions since the mid-2000s, the study noted.

"Electricity storage technology is critical when it comes to meeting the demand for electric mobility and achieving the shift towards renewable energy that is needed if we are to mitigate climate change," said EPO President Antonio Campinos. 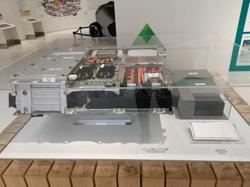