(Reuters) - The Trump administration reversed guidance Friday on COVID-19 testing for a second time, urging those exposed to people with the virus to get tested even if they are not displaying symptoms.

The Centers for Disease Control and Prevention (CDC) sparked widespread outcry among state public health officials and experts in late August when it said that people who do not have symptoms may not need to get tested.

Before Aug. 24, the CDC had encouraged testing for all those who were exposed. Friday's guidance update effectively returns the CDC's testing guidance to what it said before it was altered in late August.

Reuters reported that a majority of U.S. states rejected the CDC's Aug. 24 guidance in an extraordinary rebuke of the nation's top agency for disease prevention.

The change was made on a page https://www.cdc.gov/coronavirus/2019-ncov/hcp/testing-overview.html aimed at health workers.

“The return to a science-based approach to testing guidance from the Centers for Disease Control and Prevention is good news for public health and for our united fight against this pandemic," Thomas File, president of the Infectious Diseases Society of America, said in a statement.

Some state officials last month said they thought the administration's choice to play down the importance of testing reflected a desire by Republican President Donald Trump to cut the tally of new cases.

Trump, who is running for re-election on Nov. 3, told a rally in June testing is a "double-edged" sword because it leads to more cases being discovered, causing the United States to appear worse off than it would otherwise. He added that he urged officials to "slow the testing down, please." A White House official at the time told Reuters that the remark was a joke.

Trump administration officials denied that the move was political and told Reuters that it reflected "current evidence and best public health practices." 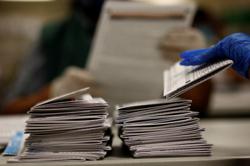