Hurricane Sally is taking aim on the Gulf Coast. The U.S. Bureau of Safety and Environmental Enforcement on Tuesday estimated that nearly 27 percent of oil production in the Gulf of Mexico has been shut in, along with 28.03 percent of natural-gas production, as a precaution.

Meanwhile, demand concerns lingered on the oil market as the Organization of the Petroleum Exporting Countries (OPEC) lowered its forecast.

In its closely-watched monthly report on Monday, the OPEC said that "in 2020, the global oil demand contraction is revised down further by 0.4 mb/d (million barrels per day), now contracting by 9.5 mb/d, to average 90.2 mb/d." 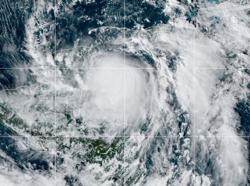