Brazil's Bolsonaro says he wants to punch reporter in face

FILE PHOTO: Brazil's President Jair Bolsonaro looks on as he adjusts his protective face mask during a ceremony launching a program to expand access to credit at the Planalto Palace in Brasilia, Brazil, August 19, 2020. REUTERS/Adriano Machado

BRASILIA (Reuters) - Brazilian President Jair Bolsonaro said on Sunday he wanted to punch a reporter in the face for asking about bank deposits made in the account of his wife, First Lady Michelle Bolsonaro, by a former aide to one of his sons.

"I want to punch you in the face, OK?" the right-wing president replied to the reporter from the O Globo newspaper, according to audio released by the daily.

Earlier this month, local media reported that the aide, Fabricio Queiroz, deposited 72,000 reais in checks in the first lady's account between 2011 and 2018.

Queiroz was an aide to now Senator Flavio Bolsonaro, the president's eldest son, when he was a Rio de Janeiro state legislator. The former aide is under arrest in an investigation into bank deposits made at the time amounting to 1.2 million reais ($213,500).

Questions about Queiroz have continued to hound the Bolsonaro family in an investigation that has appeared to annoy the president and dent his promise not to tolerate corruption. 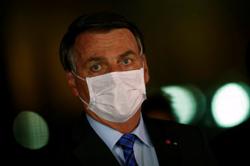