Factbox: Latest on the worldwide spread of coronavirus

A relative wearing personal protective equipment (PPE) stands next to a body of a man who died due to the coronavirus disease (COVID-19), before his cremation at a crematorium in New Delhi, India August 22, 2020. REUTERS/Adnan Abidi

(Reuters) - Prime Minister Jacinda Ardern delivered the biggest election victory for her centre-left Labour Party in half a century as voters rewarded her for a decisive response to COVID-19. Her "go hard, go early" approach has eliminated locally spread COVID-19 in the nation.

* For an interactive graphic tracking the global spread of COVID-19, open https://graphics.reuters.com/world-coronavirus-tracker-and-maps/ in an external browser.

* Eikon users, see MacroVitals for a case tracker and summary of news.

* Austrian Foreign Minister Alexander Schallenberg has tested positive for the coronavirus and might have caught it at a meeting with his European Union counterparts on Monday, a spokeswoman for his ministry said.

* A man living in the same Vatican residence as Pope Francis has tested positive for COVID-19 and gone into isolation, the Vatican said.

* A federal judge on Friday rejected a request from the Roman Catholic Diocese of Brooklyn to void New York state's limits on religious gatherings in coronavirus hot spots, which the diocese argued had effectively closed its churches.

* Australia's coronavirus hotspot of Victoria recorded a single case on Saturday - the lowest daily number since early June - and no deaths, with the state's top health official calling the figures "one-der-ful".

* India’s infections rose by another 62,212 cases over the previous day and a local media report said on Saturday the government had begun identifying about 300 million people who would be given a vaccine first when it is ready.

* Pfizer Inc said it could file in late November for U.S. authorization of the COVID-19 vaccine it is developing, suggesting that a vaccine could potentially be available in the country by the end of the year.

* The World Health Organization said it would assess monoclonal antibodies and other antiviral drugs in its trial of potential COVID-19 treatments, after the trial found Gilead Science's remdesivir had no impact on survival rates.

* Malaysia Airlines' parent company is still holding negotiations with lessors and creditors over a restructuring plan to keep the carrier alive, but the talks are taking longer than planned, according to a staff memo seen by Reuters. The airline is seeking to restructure after the pandemic forced it to slash operations. 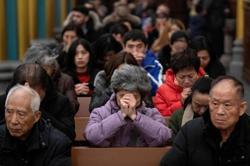