OTTAWA, Aug. 13 (Xinhua) -- Canadians have varied reactions to the restrictions against the COVID-19 pandemic as the number of cases continues to go down, a new survey has found.

A survey issued by Canada's non-profit Angus Reid Institute on Thursday showed that 52 percent of Canadians said the current restrictions against the COVID-19 are about right, and 20 percent said controls go too far, while 28 percent said they are not restrictive enough.

The country's current restrictions include access to public spaces, mask wearing and physical distancing which vary from province to province and can even vary within provinces due to municipal bylaws.

There have been 120,844 cases of COVID-19 in Canada to date, including 9,006 deaths. The country has tested 4,581,083 people for COVID-19. Over the past week, an average of 43,000 people were tested daily, with 1 percent testing positive and an average of 376 new cases reported daily from across the country, according to the Public Health Agency of Canada on Thursday.

Significantly fewer new cases are being reported daily compared to the more intense weeks of COVID-19 activity in Canada, from late March to June.

Case counts peaked in late April and early May at close to 1,800 daily cases and then declined steadily.

Over the last several weeks, national daily case counts are averaging between 350 to 500 cases.

The number of new deaths reported daily has remained low following a steep decline from the peak in early May when close to 200 deaths were reported daily. Fewer than 10 deaths have been reported per day on average over the last four weeks. 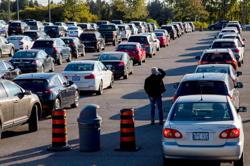