Kenyatta, who spoke during a virtual meeting with elite Kenyan marathoner Eliud Kipchoge, expressed satisfaction with the measures being taken by stakeholders in the hospitality sector to protect tourists from the pandemic.

"Safety is not really just a government issue. It is an individual choice. To remain safe and by so doing, keep everybody else safe," he said in a statement issued after the meeting.

Kipchoge is Kenya's new goodwill ambassador for tourism and is in the Masai Mara Game Reserve with his family to witness this year's annual wildebeest migration.

The president said Kenya is ready to receive tourists and encouraged local and foreign travelers to take advantage of the prevailing low rates to visit the country's famous tourist sites.

"And now as you know, we have also opened up our skies and flights are coming. We welcome all those who choose to come," he added.

The east African nation's tourism sector has slumped to its lowest level in decades following the outbreak of the COVID-19 pandemic in March, as restrictions which were put in place locally and internationally curtailed travel.

The sector has lost some 81.8 billion shillings (about 770 million U.S. dollars) since March, according to Tourism minister Najib Balala, which is about 50 percent of its average annual revenue.

Kenyatta urged Kenyans as well as visitors to continue observing the COVID-19 containment protocols saying, safety is not a government responsibility but an individual choice.

The pandemic had literally grounded the industry to a halt, with over 2.3 million employees sent home, a majority on unpaid leave while the lucky ones on half pay.

All the top hotels, lodges and tourism destinations in the east African nation were shut in the past months as they grappled with lack of visitors.

During the meeting, Kipchoge said he was grateful to represent his country as a tourism goodwill ambassador and assured the President that he will do his best to promote the country as a top travel destination.

Balala said hotels in the Maasai Mara were fully booked for the current high season, mostly by local tourists, and encouraged Kenyans and foreign travelers to visit destinations across the country.

He said the tourism ministry has introduced necessary measures to ensure that Kenyans' safety and that of international tourists is secured during this period. 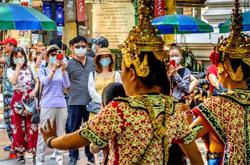