Bystanders look at MV Wakashio bulk carrier that had run aground and from which oil is leaking near Blue Bay Marine Park in south-east Mauritius on Aug 6, 2020. - AFP

JOHANNESBURG (AP): The Indian Ocean island of Mauritius declared a "state of environmental emergency" late Friday (Aug 7) after a Japanese-owned ship that ran aground offshore days ago began spilling tons of fuel. 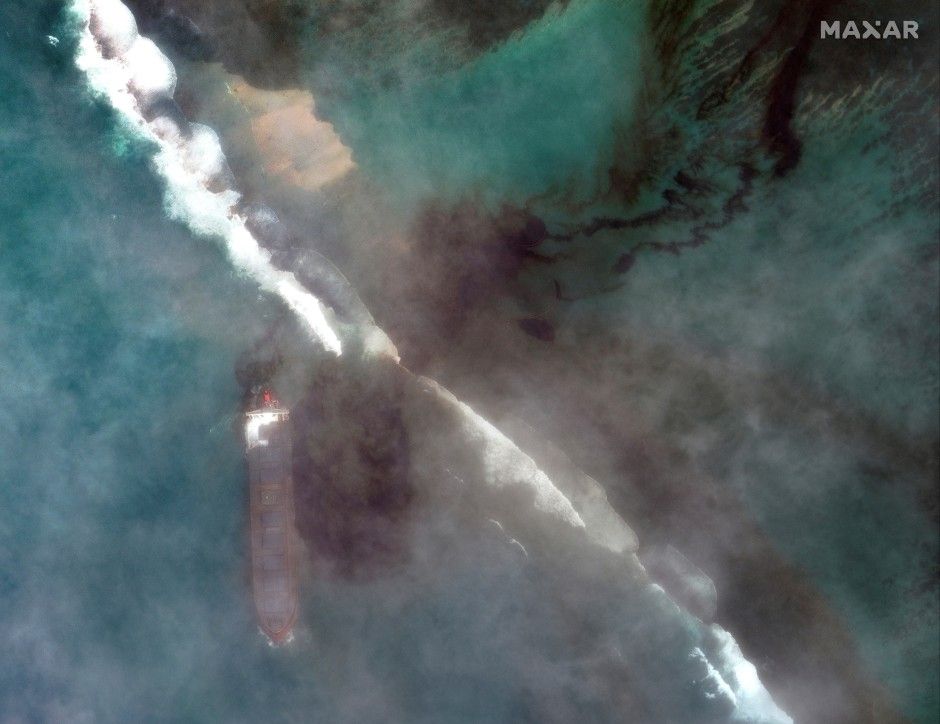 A satellite image shows the bulk carrier ship MV Wakashio and its oil spill after it ran aground off the southeast coast of Mauritius, Aug 7, 2020. - Maxar Technologies/Reuters

Mauritius has said the ship was carrying nearly 4,000 tons of fuel and cracks have appeared in its hull.

Jugnauth earlier in the day said his government was appealing to France for help, saying the spill "represents a danger" for the country of some 1.3 million people that relies heavily on tourism and has been hit hard by the effects of the Covid-19 pandemic.

"Our country doesn't have the skills and expertise to refloat stranded ships, so I have appealed for help from France and President Emmanuel Macron," he said. Bad weather has made it impossible to act, and "I worry what could happen Sunday when the weather deteriorates."

Jugnauth shared a photo of the vessel, the MV Wakashio, tilted precariously.

Video posted online showed oily waters lapping at the shore as people murmured and peered at the ship in the distance. Online ship trackers showed the Panama-flagged bulk carrier had been en route from China to Brazil.

The French island of Reunion is the closest neighbor to Mauritius, and France's Foreign Ministry says France is Mauritius's "leading foreign investor" and one of its largest trading partners.

"We are in a situation of environmental crisis," the environment minister of Mauritius, Kavy Ramano, said, calling the Blue Bay Marine Park and other areas near the leaking ship "very sensitive."

After the cracks in the hull were detected, a salvage team that had been working on the ship was evacuated, Ramano told reporters Thursday. Some 400 sea booms have been deployed in an effort to contain the spill.

Government statements this week said the ship ran aground July 25 and the National Coast Guard received no distress call. The ship's owners were listed as the Japanese companies Okiyo Maritime Corporation and Nagashiki Shipping Co. Ltd.

A police inquiry has been opened into issues such as possible negligence, a government statement said.

Tons of diesel and oil are now leaking into the water, environmental group Greenpeace Africa's climate and energy manager Happy Khambule said in a statement.

"Thousands of species around the pristine lagoons of Blue Bay, Pointe d'Esny and Mahebourg are at risk of drowning in a sea of pollution, with dire consequences for Mauritius' economy, food security and health," Khambule said.

A government environmental outlook released nearly a decade ago said Mauritius had a National Oil Spill Contingency Plan but equipment on hand was "adequate to deal with oil spills of less than 10 metric tonnes."

In case of major spills, it said, assistance could be obtained from other Indian Ocean countries or from international oil spill response organisations. – AP 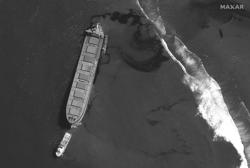 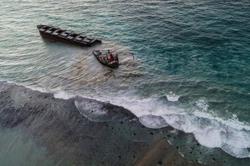