MEXICO CITY, Aug. 5 (Xinhua) -- Mexico's National Institute of Immigration (INM) said Wednesday it has recovered 51 bodies of foreign migrants from the country's northern border with the United States since 2019.

According to the INM, members of its Beta Group special task force recovered the bodies from desert terrain and the Rio Grande River that separates the two countries, which is known as the Rio Bravo south of the border.

"Unfortunately, 51 foreign corpses were recovered in the Rio Bravo and desert regions along the country's northern border between 2019 and 2020," the INM said.

The task force, founded 30 years ago, also aids migrants in transit through Mexico.

Migrants often drown attempting to cross the river to sneak into the United States undetected, but the border area's desert and mountain terrain can be just as treacherous, with temperatures rising to 50 degrees Celsius in the summer, the INM said.

Immigration observers said migrant deaths have increased as surveillance and security measures have been stepped up to prevent clandestine crossings.

Inflation in Mexico reaches 4.1 pct in first half of September 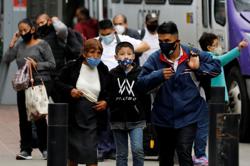