The huge explosions rocked Beirut at around 6:10 p.m. local time (1610 GMT), shaking buildings all over the capital city while causing heavy damage. (Lebanon-Explosion)

TEHRAN -- Iran on Tuesday recorded 2,751 new COVID-19 cases during the past 24 hours, bringing the total number of infections to 314,786, Sima Sadat Lari, spokeswoman for the health ministry, announced during her daily update.

According to the official IRNA news agency, Lari said that the death toll from the virus in the country rose to 17,617 after 212 new deaths were added. (Iran-COVID-19)

DAMASCUS -- A total of 30 Turkish military vehicles entered northern Syria on Tuesday, the latest batch of such military backup since March, a war monitor reported.

ANKARA -- Turkish health minister on Tuesday warned of an increase in daily new COVID-19 cases as the figure exceeded 1,000 for the first time in weeks.

The country's confirmed cases increased by 1,083 and 18 more people died in the past 24 hours, taking the number of total cases to 234,934 and the death toll to 5,765, Turkish Health Minister Fahrettin Koca tweeted on Tuesday. (Turkey-COVID-19) 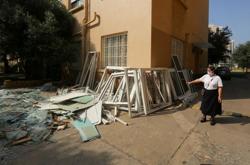